You are in : Resident Newsletters

The current Castle Baynard Resident and all previous back issues are available here.

We are delighted to report the successful outcome of the Fleet Street Quarter (FSQ) Business Improvement District (BID) ballot which was announced at Guildhall on February 15th. The ballot turnout was 36% and there was a decisive majority in favour of the proposal both in terms of votes cast, and aggregate rateable value. The ballot for the new EC (Eastern City) BID had a similarly clear outcome. 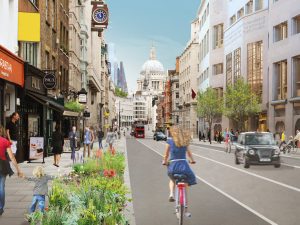 Visual copyright of Publica and Primera and
reproduced with their kind permission.

The boundary of the FSQ BID area covers parts of the wards of Castle Baynard, Farringdon Within and Farringdon Without. Driven by the private sector, the FSQ BID will go live in April for a first five-year term, with the aim of delivering a range of ambitious projects including public realm enhancements, green and climate resilience initiatives and high-profile destination marketing campaigns.

These BIDs will join the two BIDs already established in the City, in Cheapside and Aldgate. The ballot results are a strong endorsement of the work of BIDs across the Square Mile and London, where now there are more than 70. The City of London Corporation, as BID proposer across the Square Mile, is committed to supporting the development of BIDs. The BID team will now work with the City Corporation and other partners to deliver the ambitious business plans which were published in advance of the ballots being held.

Sincere congratulations are due to the BID team that drove this proposal forward despite the difficulties caused by the pandemic, in particular the FSQ BID Chair Alistair Subba Row and Ruth Duston. Ruth Duston OBE OC, MD of Primera Corporation, the regeneration consultancy which helped establish both the FSQ and EC Partnerships and led the BID ballot campaigns, said: “BIDs in the capital are a powerful and strategic force for good. From transformational public realm projects, to supporting small businesses and making areas safer, cleaner and more pleasant places to visit or work, BIDs have a proven track record for driving change and innovation.” 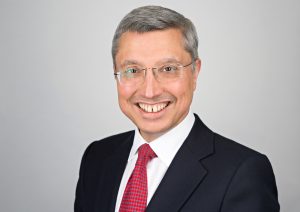 Sushil Saluja, Chair of Heart of the City, welcomed the news of the BID: “I’m proud to back the BID which shows the kind of vision we need to bring new energy and prosperity to this historic and vibrant part of the City, as we recover from the pandemic. I look forward to working with the team to help ensure the project maximises opportunities for growth for our small and larger businesses as well as enhanced environment for residents”.

Ward member Graham Packham Chair of the City Streets & Walkways (S&W) Committee commented “I really welcome the outcome of the ballot. My Committee has overseen numerous wonderful public realm projects in the Square Mile in cooperation with other City BIDs in recent years, and I have been disappointed we have not been able to do likewise in our area of the Square Mile. The funding available from the new FSQ BID, as well as the significant section 106 contributions from the major developments underway in Fleet Street will help the Committee and the BID team transform the FSQ area.”

There is also a welcome proposal to develop a Riverside Bid which would include the areas of the Ward south of Tudor Street and Queen Victoria Street, and the team look forward to helping this come to fruition. 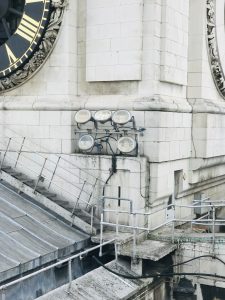 Team members are very pleased to report that the City Corporation’s Streets & Walkways and Policy & Resources Committees have recently approved a recommendation to replace the current external lighting system (see picture to the right) on St. Paul’s Cathedral with new LED fittings. This project will significantly improve the night-time appearance of Christopher Wren’s magnificent Grade I Listed building in the Ward, and bring it back to the heart of London’s skyline at night, as well as reducing carbon emissions by an estimated two thirds when compared with the current lighting system.

The project will allow the Cathedral to be seen in its entirety across the city at night for the first time in many years. Efficient LED spotlights will replace failed lighting that has left half of the dome in darkness, and the project will also replace cabling and electrical equipment that is now at end of life. The ageing lights on the western and northern sides of the dome have now failed leaving Paternoster Square in semi darkness at night

A spokesperson from St. Paul’s Cathedral said: “St. Paul’s Cathedral is thrilled to be working in partnership with the City of London Corporation to externally light the Cathedral. This eco-friendly project is only able to be started due to the generosity of the City Corporation and all involved in raising the necessary funds. Our heartfelt thanks to all involved.” The work will take until the end of next year to complete but will be implemented in phases, with the replacement of the dome illumination being the first priority. This application will be considered by the City Policy & Resources Committee on May 5th.

The detailed application which contains the background which triggered the proposal, and the fascinating history of the pub can be downloaded from here: